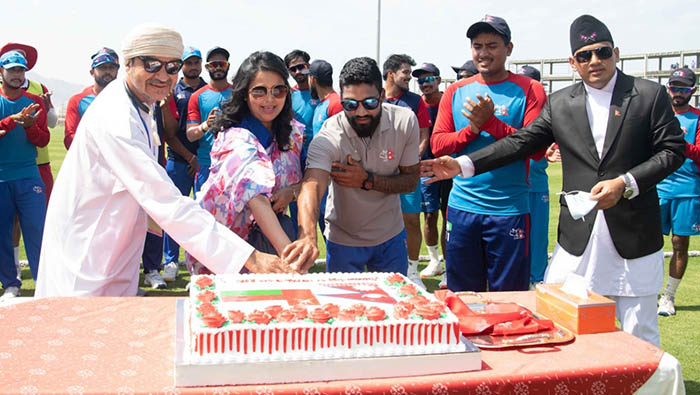 Muscat: The National Day and Constitution Day of Nepal is celebrated on 19 September every year when the present Constitution of the country (2015) was unanimously passed by the second Constituent Assembly.

This constitution is claimed to be the most inclusive and progressive document drafted by representatives of people through Constituent Assembly in the annals of world constitution Every year Nepal Embassy in Muscat organises various programmes to highlight the importance of the day.

Despite the effect of pandemic, this year also on the occasion of National Day and Constitution Day of Nepal 2021, Embassy of Nepal in Muscat organised a three-day programme to commemorate the day for the leaders who directly or indirectly contributed to its cause. Due to the COVID-19 protocols, participants were reduced to as minimum as possible.

On the evening of the first day, 18 September 2021, the Embassy lighted candles on the premises of the chancery in the presence of few community people. Ambassador Dr. Sarmila Parajuli Dhakal lit the first candle to inaugurate the three-day event.

On 19 September 2021, the Embassy celebrated the “National Day with male National Cricket Team” of Nepal.

In the morning, Dr. Sarmila Parajuli Dhakal hoisted the flag of Nepal at the chancery building.

In the afternoon the envoy, Nepal National Cricket Team captain Mall cut the cake to mark the National Day in the presence of chairman of Oman Cricket Pankaj Khimji and other officials at Al-Amerat Cricket ground.

Cake and soft drinks were distributed to the participants and public on the occasion. The ambassador extended her best wishes to the National Cricket Team for their match immediately after the programme.

The cricket team is on a visit to Oman to play Cricket World League-2, triangular series against the hosts and the USA.

Xiaomi 12 Ultra set to roll out on July 5