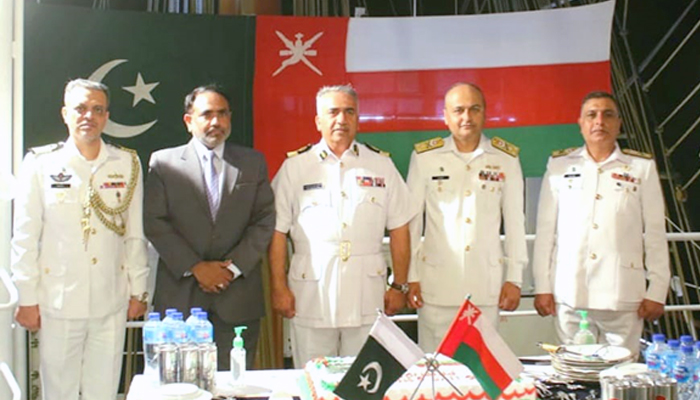 The flotilla was led by Commodore Syed Sajid Hussian, serving as mission commander. Parallel to the Pakistan Navy ships and submarine visit to Muscat, Vice Admiral Ovais Ahmed Bilgrami, commander of the Pakistan fleet, also visited Muscat from 2 to 4 January 2022.

During the visit, the commander of the fleet, along with the mission commander, and defence attaché of Pakistan, called on Vice Admiral Abdullah bin Khamis Al Raisi, COSSAF (Chief of Staff of the Sultan’s Armed Forces), Rear Admiral Saif Bin Nassir Al Rahbi, CRNO (Commander, Royal Navy of Oman), and Brigadier Ali Al Maqbali, director general of the Coast Guard at the Royal Oman Police.

The naval delegation held discussions on bilateral cooperation between the Pakistan Navy and RNO, as well as the Pakistan Maritime Security Agency (PMSA) and Omani Coast Guard.

On 3 January 2022, a reception was hosted on-board PNS Rahnaward (while abiding by the operating protocols and instructions issued by the Supreme Committee for dealing with COVID-19) which was attended by Vice Admiral Ovais Ahmed Bilgrami, members of the Majlis Al Shura, local dignitaries, diplomats including ambassadors and military attaches of various countries and officers from the Royal Navy of Oman.

Commodore Tariq bin Issa Al Raisi, PSO, Royal Navy of Oman graced the occasion as chief guest. The visit by the Commander, Pakistan Fleet along with the Pakistani naval ships and submarine, was aimed at strengthening the bonds of friendship between the Sultanate of Oman and Pakistan in general and the Royal Navy of Oman and Pakistan Navy in particular, as well as exploring new vistas for future collaborative initiatives between the two brotherly countries.

The visit will surely contribute towards improving interoperability and learning from each other's experiences on maritime operations.