Putin vows Russia won't be isolated in meeting with Lukashenko 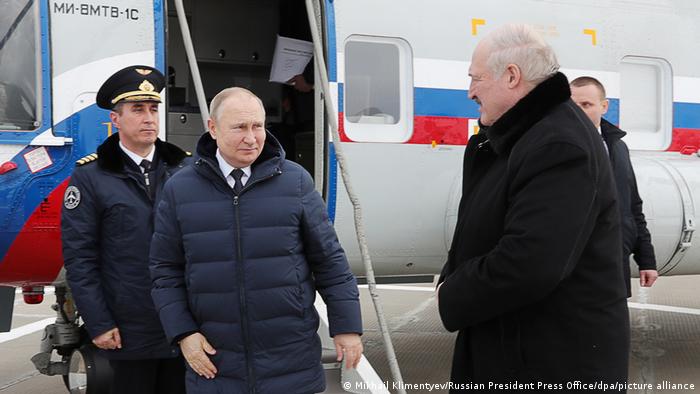 The Russian president headed to the country's far east on Tuesday to the Vostochny Cosmodrome space launch facility together with Belarusian President Alexander Lukashenko.

Putin's visit marked his first known trip outside Moscow since Russia launched its war in Ukraine on February 24. He insisted that Russia has no intention to isolate itself amid widespread outrage at Russia's invasion and sanctions imposed by the West.

What did Putin say?


Putin used the visit to highlight the success of the Soviet Union's space program, citing it as evidence that Russia could achieve spectacular leaps without help from the West.

However, the Russian leader said, Moscow was keen to work with other countries.

"We don't intend to be isolated," Putin said. "It is impossible to severely isolate anyone in the modern world — especially such a vast country as Russia."

"We will work with those of our partners who want to cooperate," Putin said.

He also mentioned the war in Ukraine, referring to its as a "special military operation'' to "ensure Russia's own security."

"Its goals are absolutely clear and noble," Putin said. "It's clear that we didn't have a choice. It was the right decision."

Russia used a false pretext that Ukraine was responsible for genocide in eastern Ukraine in its justification for launching its war in Ukraine. The Kremlin claimed that it needed to "denazify" the country, without providing any credible evidence for its claims.

Ukrainian forces have confounded Russian expectations by mounting stiff resistance, while the West has imposed far-reaching sanctions on Russia to exert pressure on Moscow to end its war.

Russia is presently facing soaring inflation and capital flight while also struggling with the prospect of a possible debt default.

The pair were expected to talk about closer integration between Russia and Belarus, as well as the war in Ukraine.

Sanctions have been placed on Belarus for allowing Russia to use his country as a staging point for attacks on Ukraine. However, Lukashenko appeared defiant on his visit to Vostochny, which coincided with Russia's "Space Day."

"Why an earth are we getting so worried about these sanctions?" Lukashenko was reported as saying.

Lukashenko has previously insisted that Belarus must be involved in negotiations to resolve the conflict in Ukraine. He also claims that Belarus had been unfairly labeled "an accomplice of the aggressor."