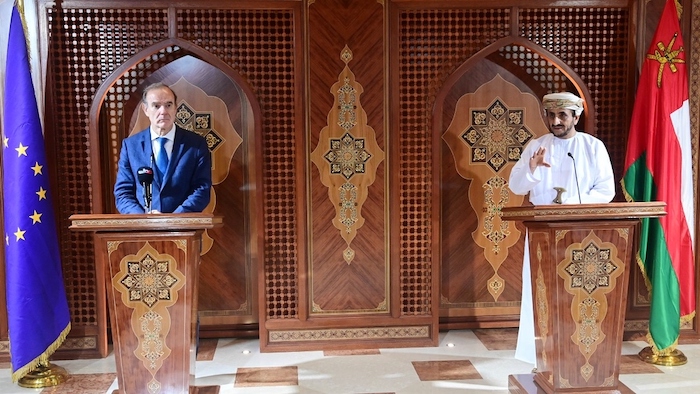 The European Union (EU) said a decision will be taken, within two weeks, for Sultanate of Oman's entry into the course of negotiations pertaining to the Schengen visa waiver for Omani citizens.

During the press conference held at the Foreign Ministry here today, Enrique Mora, Deputy Secretary-General and Political Director of the European External Action Service (EEAS) of the EU stressed the "historic role" of the Sultanate of Oman and its efforts in resolving many regional and international issues, particularly the Iranian nuclear file. He said “We look forward to support peace efforts together.”

He added that there are ongoing negotiations with the GCC countries related to free trade.

He furthered that the EU is looking forward to augmenting cooperation with the countries of the region in several areas, including maritime security, training, energy and technology.

Mora described Oman Vision 2040 as "ambitious" as it focuses on several themes and covers different aspects.

He pointed out that his current visit to the Sultanate of Oman represents an opportunity to review the bilateral relations between the EU and Oman, as well as ways to promote them and discuss foreign policies between the two sides.

Mora explained that the EU is striving to look for alternatives to provide liquefied gas, and on the long-term, the EU is exploring prospects for cooperation in the field of green energy.

He added that the European partnership strategy with the GCC states focuses on cooperation in several spheres, including energy and security.

On his part, Sheikh Khalifa Ali Al Harthy, Undersecretary for Diplomatic Affairs, said: "A representation office of the European Union will be opened in the Sultanate of Oman soon."

Al Harthy reaffirmed that the Sultanate of Oman and the EU countries enjoy growing relations.

He added that Oman welcomes the European partnership strategy with the GCC countries and looks forward to strengthening these relations in various fields.

Al Harthy pointed out that the third round of talks between the Sultanate of Oman and the EU, which was held at the Foreign Ministry, affirm that the relations between the two sides scale new heights.