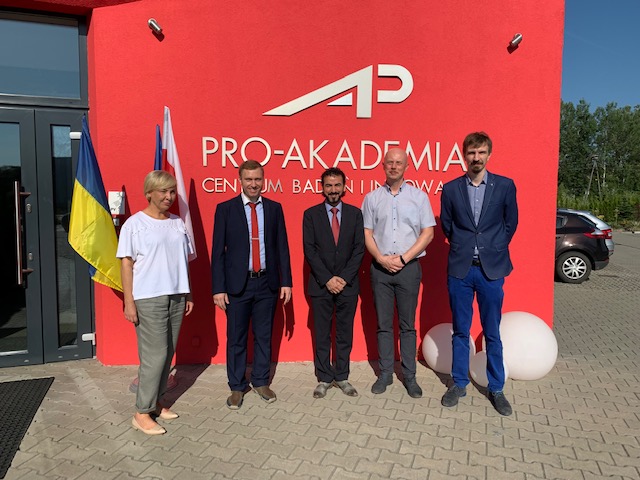 The oil industry is one of the world's biggest industries and is a locomotive driving the Omani national economy. The crude oil extraction is always coupled with environmental challenges, and in addition, it consumes a large amount of water which later needs to be treated: extracting 1 barrel of crude oil produces around 9 barrels of contaminated water. Furthermore, potential crude oil and wastewater spills due to accidents cause soil, river, and underground water contamination, harming local society and human activities. Eliminating these environmental and social consequences requires significant financial expenditures burdening the Omani national economy.

The Research and Innovation Centre , RIC Pro-Akademia, from Republic of Poland and the German University of Technology in Oman (GUtech) have established a new initiative to solve the problem of water contaminated with crude oil in Oman: the WASTE4H2 project. Within this project, produced water will be processed using an innovative process that can significantly reduce wastewater contamination. An additional advantage of the proposed technology is that it simultaneously produces hydrogen. The process will be powered with green energy, produced by the innovative PVT system, resistant to overheating and dusty sand from the desert.

“Advanced oxidation process has already shown promising results in treating industrial, agricultural, and domestic wastewaters containing harmful pollutants such as aromatic compounds, dyes, pesticides, etc., as well as pathogenic microflora. This is because of several major factors affecting the potential contaminants such as the high temperature, the emitted light spectrum, the production of the hydroxyl radicals and hydrogen peroxide , and the generated shock waves in the vicinity of the discharge electrode” – says a Project Manager from RIC Pro-Akademia Dr.-Ing. Marcin Siedlecki.

“Currently, according to human attempts to build a carbon-free society, considerable attention is given to developing hydrogen-generating technologies. This is because hydrogen has a high specific energy density and is considered a clean energy carrier. Moreover, due to the intermittency of the renewable electricity generated by variable renewable energy sources, such as solar and wind power, hydrogen production offers a continuous way of converting renewable energy into so-called renewable hydrogen. For these reasons, hydrogen is regarded as an energy carrier of the future.” – said a Principal Investigator from RIC Pro-Akademia Dr.-Ing. Sergii Bespalko.

The current available electrolyser to produce green hydrogen requires high purity water. Consequently, it is necessary to have a water pre-treatment plant, which is another challenge concerning the excessive cost and membrane contamination when it comes to treating industrial wastewater. Therefore, developing an integrated system that converts industrial wastewater (e.g., produced water) to hydrogen seems to be a novel technology that is simultaneously addressing the technical issues of other methods and produces valuable products. In this project, wastewater will be processed using an innovative advanced oxidation process that can significantly reduce wastewater contamination.” said Dr. Eng. Najah Al Mhanna, the Principal Investigator at GUtech.

WASTE4H2 is financially supported by the Polish National Centre for Research and Development (NCBR) in the framework of the INNOGLOBO program and by the German University of Technology in Oman (GUtech).

“We are very glad about of the established R&D collaboration between institutions of our countries – Republic of Poland and Sultanate of Oman. The proposed research project aims to develop a pilot unit at the scale of 0.5 m3 of wastewater per hour, combining advanced oxidation process for wastewater treatment and simultaneous hydrogen production for future transport, buildings, mobile electronic devices, and industrial applications. The new proposed technology will be interesting for the Polish oil refineries as well.” – said President of RIC Pro-Akademia Mrs. Dr. Ewa Kochańska.

The increasing demand for energy while at the same time aiming to reduce CO2 emission (zero emission) gives a new level of urgency to the development of alternative technologies and approaches, such as renewable energy and hydrogen production. Hydrogen is considered as an essential key component in the future energy supply. Moreover, the potential of hydrogen as new economic engine for Oman has been emphasized by the Hydrogen Economy Feasibility Study that was conducted by the Ministry of Energy and Minerals in Oman” said Prof Armin Eberlein, the Deputy Rector for Academic Affairs at GUtech.

The kick-off meeting of the project partners was held recently at the Research and Innovation Centre Pro-Akademia, where Prof. Najah Al Mhanna represented the German University of Technology in Oman. The project partners had an excellent opportunity to discuss the timing and structure of the work packages, allocation of tasks, as well as envisaged deliverables and milestones.