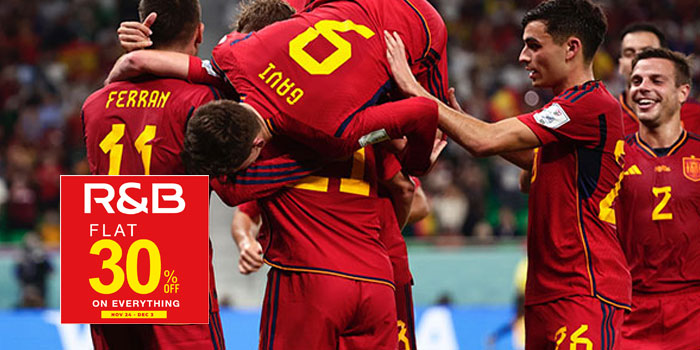 Al Thumama [Qatar]: Spain thumped Costa Rica 7-0 in a dominant display of football in its opening match at the 2022 FIFA World Cup on Wednesday at the Al Thumama stadium.

The Spanish team added four more goals to their tally, piling up the misery on Costa Rica, in the second half of the match. Spain scored through Ferran Torres, Gavi, Carlos Soler and Alvaro Morata in the second half, stamping their authority over the Central-American team.

The Spanish team replicated their superb performance from the first half as their opponents did not have any answer to their attacks, orchestrated by Sergio Busquets.

Owing to superior midfield play, Spain was able to create more scoring opportunities than Costa Rica, who simply were on the defence right from the beginning.

Talking about the first half, Costa Rica looked helpless against Spain in the Group E match at the Al Thumama Stadium with the Spanish team leading the game at 3-0 at the end of the first half.

The 2010 World Cup champions were in charge of the proceedings against Costa Rica with goals from Dani Olmo, Marco Asensio, and Ferran Torres.

Olmo ultimately scored in the 11th minute after sending his initial effort just wide in the opening minutes of the first half. After Keylor Navas managed to get a hand on Jordi Alba's low cross, Asensio scored to make it 2-0.

Spain's third goal came from Torres who kept his cool to find the back of the net via a penalty kick in the 31st minute.

The game did favour the Spanish team as they are ranked seventh while Costa Rica is ranked thirty-first in the FIFA rankings.

Experienced mid-field player Sergio Busquets called the shots while controlling the ball and forcing spaces in the opposition's defence.

The Spanish team dominated right from the word go, maintaining great possession over the ball. They controlled the ball superbly with their renowned short pass playing technique, creating gaps and making runs for the Costa Rican box.

Costa Rica seemed to never recover from the onslaught and kept chasing the ball unable to take any shot at the Spanish goalpost.

Spain and Costa Rica have faced off three times since 2010, and Spain has never lost a match, winning two and drawing one and the same would be on the cards if the latter does not score quickly in the second half.

The Spanish team is trying to forget their run from the last two World Cups. The team could not make it to the knockout stage in the 2014 edition, exiting in the group stage. It got knocked out in the 2018 World Cup in the round of 16 stages.

Spain will look to forget the past horrors and look to turn a new page with a relatively young side in the 2022 World Cup.