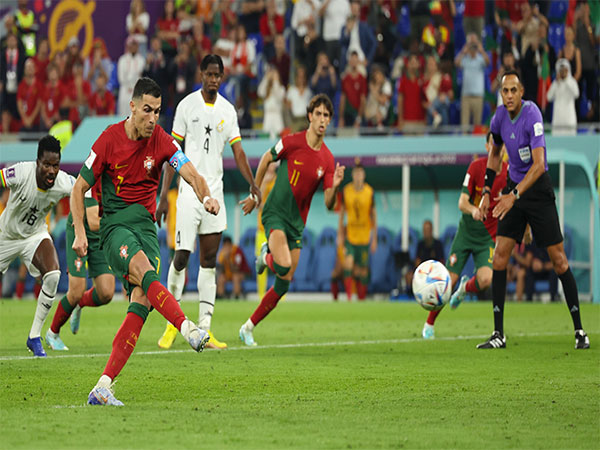 Doha: Resilient Portugal put up a good performance against Ghana to register a victory by 3-2 in their thrilling opening match of the ongoing FIFA World Cup 2022 here at Stadium 974.

Cristiano Ronaldo missed a couple of big chances in the early stage of the match in the first half but finally put Portugal in front with a goal from the penalty spot. In the 65 minutes of the game, Portugal captain Cristiano Ronaldo became the first player to score in five different World Cups. Lengthy protests from the Ghana players and Ronaldo lasered the ball past the goalkeeper when the box was finally cleared. Ronaldo won the penalty and made no mistake to score for his team.

However, Portugal's joy was shortlived as Andre Ayew pulled one back for Ghana in the 73rd minute of the match but Portugal immediately responded with quickfire goals from Joao Felix (78) and substitute Rafael Leao (80).

Portugal made a triple substitution and one of the players they took off was Ronaldo. Cross came in from the left and Pereira seemed uncomfortable as Osman Bukari came in to turn it into the goal.

Inaki Williams surprised Portugal goalkeeper Diogo Costa to steal the ball in the area in the tenth minute of stoppage time, giving Ghana a wonderful chance to tie the score. However, the forward missed his footing at the key moment, allowing Ronaldo and his teammates to hold on for the win.

Three minutes later Raphael Guerreiro's cross following a corner helped Ronaldo's header from the right side of the six-yard box missed to the right.

In the 42nd minute, Raphael Guerreiro assists to Cristiano Ronaldo from the left side of the box was blocked. Ghana's defence stood tall despite numerous attempts.

Portugal enjoyed 70 per cent of the possession compared to Ghana, which had only 30. Portugal had two shots on target while Ghana had none.