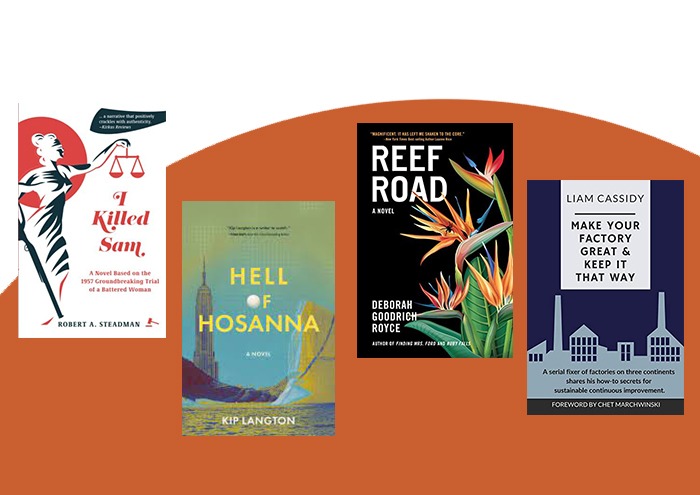 When a severed hand washes ashore in the wealthy enclave of Palm Beach, FL, the lives of two women—a lonely writer obsessed with the unsolved murder of her mother’s best friend and a panicked wife whose husband has disappeared with their children — collide as the world shutters in the pandemic lockdown of 2020.

In a nod to the true crime that inspired it, “Reef Road” probes unhealed generational scars in a wrenching and original work of fiction. It is both stunning and appealing and, like a bystander surprised by a curtain left open, you won’t be able to look away. “Though pure fiction, it reads as compellingly as a mixture of memoir and exposé. It has left me shaken to the core,” says NYTimes bestselling author Luanne Rice.

Hell of Hosanna
by Kip Langton

Imagine the Empire State Building removed from New York City. Imagine that building reconstructed brick-by-brick on your father's private island--the trappings of the past stolen from the public to indulge unfettered hypocrisy. This is James's defeated and ravaged landscape when his father successfully monopolizes all forms of industry into one perfect company called U atop the collapse of the old world.
Ownership no longer exists. Now, anyone can have anything--temporarily. But to James, the "rent and move on" lifestyle is a total hell. Then one strange day, the whole thing comes tumbling down and James can break away. In a U space shuttle, he travels to the ultimate unknown. Freedom? The real hosanna?

I Killed Sam
by Robert A. Steadman

Inspired by the true story of a groundbreaking defense of a Flint, MI, woman who killed her abusive husband in the mid-1950s. This fictionalized account of the trial is more than a legal trial, replete with unexpected plot turns and the drama of a young, small-town lawyer trying to juggle his obligations to his client and to his fledgling law practice. There’s also romance— attorney Bob Nichols is in love with Betty, the defendant and his high school sweetheart whom he should never have let go. Nichols is tortured by the thought of losing his long-shot, legal gamble, which would mean forever losing Betty to a life sentence in prison.

Make Your Factory Great & Keep It That Way
by Liam Cassidy

Liam Cassidy is known as “The Serial Factory Fixer.” He's the man that multinationals in the USA, Canada, China, the UK and Ireland have on speed dial. The man with the plan and the one to call to fix a broken factory.  In his 40-year career, Liam has used lean principals and tools, with his unique brand of leadership, to turn around factories and supply chains all over the world including some considered “too far gone” to salvage.

Now he shares the secret of his success and some very interesting case studies and outlines how lean principles and tools were vital in the processes he adopted to save plants. If you are determined to make your factory great, this is the only book you’ll ever need.