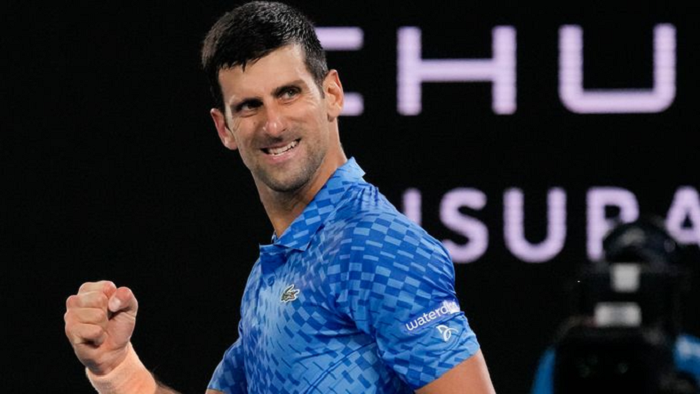 Melbourne : Serbian tennis superstar Novak Djokovic advanced to the quarterfinals of the ongoing Australian Open, defeating Australia's Alex de Minaur in their round of 16 match on Monday.

Djokovic eliminated the home player from the competition by a comfortable margin of 6-2, 6-1, 6-2. Questions were being raised over Djokovic's fitness as he was playing with a hamstring injury that made him look really uncomfortable in wins against Roberto Carballes Baena, Enzo Couacaud and Grigor Dimitrov previously.

But the nine-time Australian Open champion put all the doubts regarding his fitness to rest in a largely one-sided round-of-16 match.

"I really wanted to win in straight sets," Djokovic said as quoted by ATP.

"You obviously do not know what is going to happen on the court. I thought the first four, five games were close. After breaking serve in the first set, I started feeling more free and more loose to hit through the ball and be more aggressive," he added.

"I thought he was a bit more nervous towards the end of the second [set] and the beginning of the third set. I thought that was my opportunity to capitalise on those chances. Tennis is a very quick and dynamic sport. Things can change in a matter of moments, the matter of points. But I kept my focus all the way through and played the best match of the year so far," added Djokovic.

"It was a really physical, tough match," said Paul after his hard-earned victory on Margaret Court Arena.

"Any time you play Bautista it's going to be a war. So I was prepared for that match and I thought I executed really well today. It is always fun playing on this court, I think it was my third time playing here and it's always a blast," said Paul.

He will be taking on compatriot Ben Shelton next after the 20-year-old downed J.J. Wolf in five sets, extending his dream debut in Melbourne.

Earlier, Andrey Rublev rallied back from the brink to edge out Holger Rune of Denmark in a blockbuster 5-setter clash to book a seat in the quarter-final in the ongoing Australian Open here at the Rod Laver Arena on Monday.

"I never in my life was able to win matches like this. This is the first ever time that I won something like this, especially in a very special tournament, the Australian Open, to be in the quarter-finals. So it's something I will remember for sure all my life. I have no words, I am shaking and happy," ATP.com quoted Rublev as saying post-match. (ANI)