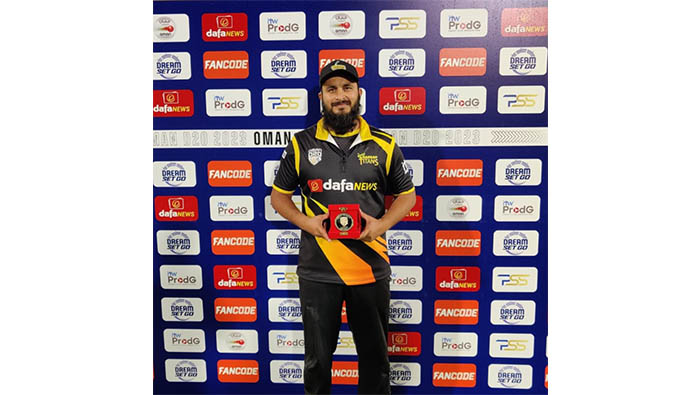 Muscat: Darsait Titans snatched win from Ruwi Rangers by 51 runs while Qurum Thunders dominate Amerat Royals to claim victory by 4 wickets in the semifinals of the Oman D20 at the Oman Cricket Academy Ground in Al Amerat.

Darsait Titans thump Ruwi Rangers
Batting first, Darsait Titans got off to a steady start courtesy their top-order. The Titans’ most profilic batmen Zeeshan Maqsood (73 of 42;4x4,7x6) turned up to the occasion to bolster a magnificent half century well supported by the young Sahil Shaik (37 of 19;3x4,3x6) to take them to 171 in 20 overs.

Mohd Nadeem (2/27) was the pick of the bowlers for the Rangers. In response, the Rangers started off well to chase down the total but loosing wickets in the middle overs courtesy of Md Yousuf’s (4/20), Zeeshan Maqsood’s (2/21) and Jan Shafiq’s (2/21) bundled the defending champions to just 120. Ruwi Rangers were unbeaten in the league stage of the Oman D20, unfortunate to succumb to the semi finals.

Zeeshan Maqsood was awarded Man of the Match for his all-round display and taking the Titans through to the Finals.

Qurum Thunders put the Amerat Royals to bat first. The Royals started off well but kept losing wickets at regular intervals making Amerat’s batsmen count each run in their innings. Amerat Royals could only manage 89 runs bundling down in 17 overs.

In response, Qurum Thunders easily chased down the target confirming their berth in the Finals. Ayaan Khan (26 of 20) was awarded the Man of the Match for scoring crucial runs and picking a wicket.

Workshop on Commodities Markets and Trading