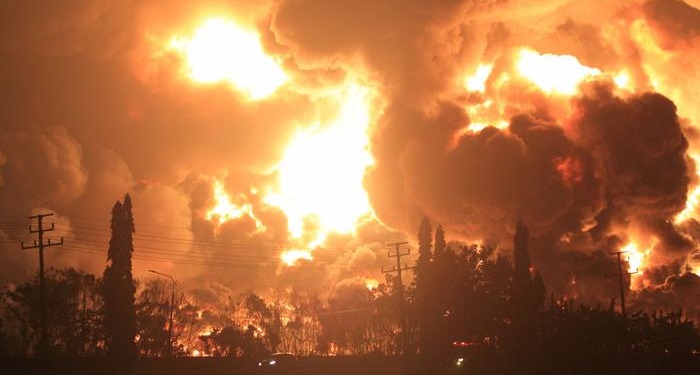 A massive fire broke out following an explosion at one of the biggest oil refineries in Indonesia on Monday.

A column of black smoke rose from the state-run Pertamina Balongan Refinery in West Java, about 225 km (140 miles) east of Jakarta.

Around 20 people were injured and hundreds of residents evacuated from a nearby village.

What do we know about the cause of the fire?


Local media reported that the fire started just after midnight. Pertamina president director Nicke Widyawati said that operations at the complex had ceased as "we are putting our efforts into handling the blaze."

The authorities have isolated and cooled the area around the flashpoint and deployed 10 fire engines, said Pertamina spokesperson Agus Suprijanto. "The fire has been localized. Therefore, it will not spread to the surrounding area," said Suprijanto.

Pertamina said that it was conducting "oil flow control" to prevent any further spread.

Officials said the cause of the fire was still unknown, but at the time it broke out, it was "raining hard accompanied by lightning," said spokesman Ifky Sukarya.

Five people were being treated in hospital for burns, Sukarya added. About 15 others were slightly injured. No Pertamina staff were hurt, he said.

What does this mean for oil production in Indonesia?


The Balongan refinery is one of the company's largest, processing oil in the Riau province and supplying fuel to the capital Jarkarta and western regions of Java island.

Shipping data on Refintiv Eikon showed an expected delivery of 600,000 barrels of crude oil from Gabon on April 10.

Repairs could take months depending on the damage, Mamit Setiawan, executive director of think tank Energy Watch said. Petramina's Cilacap refinery in Central Java should be able to meet supply shortages in the short term.

The company said that it hopes to restore operations in four or five days.